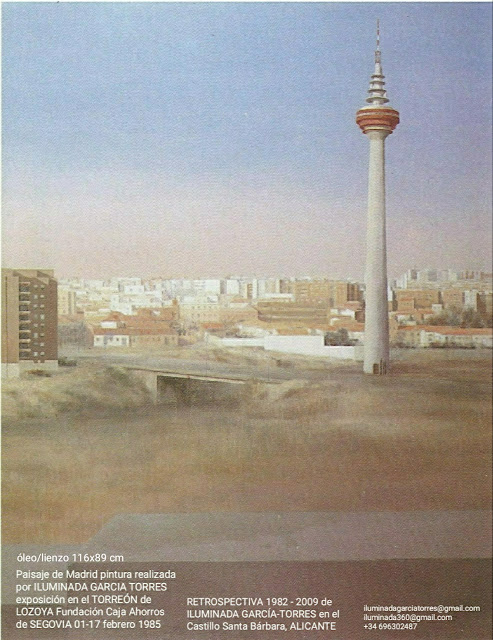 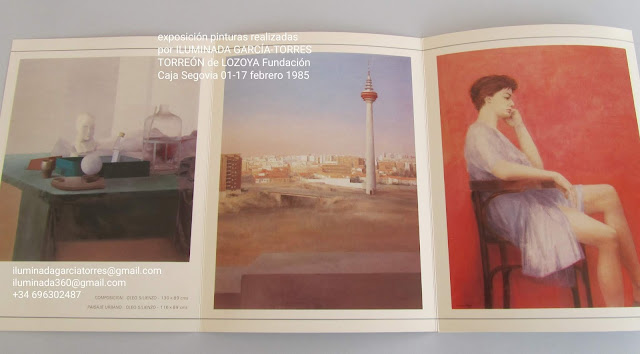 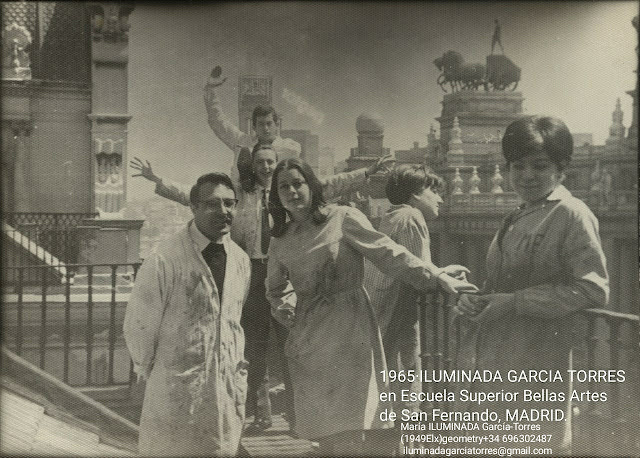 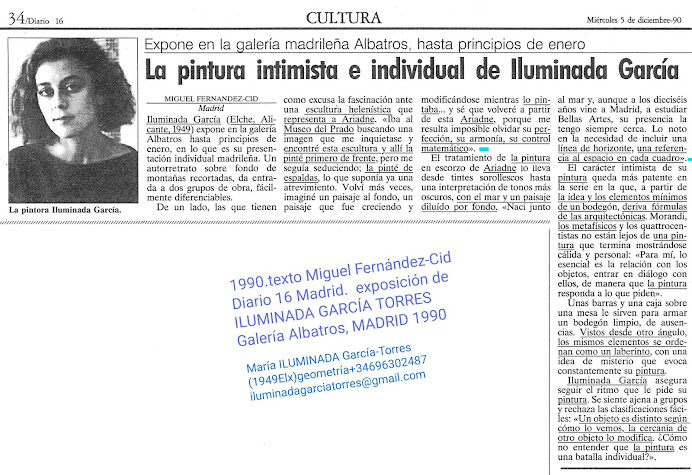 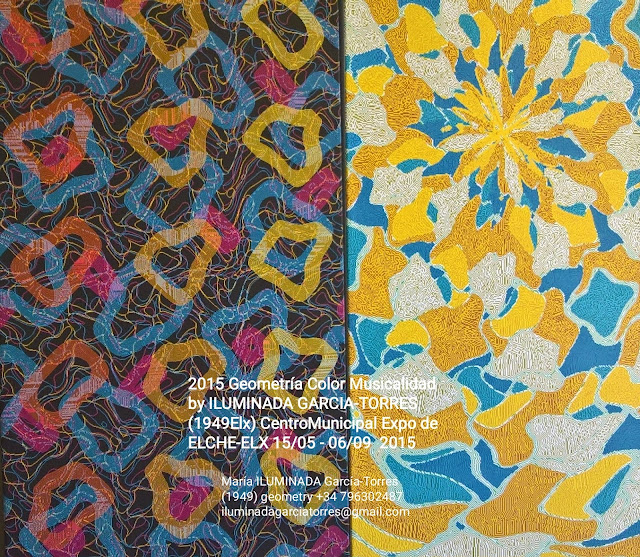 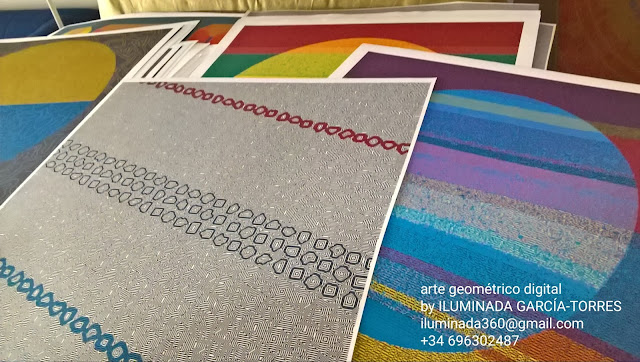 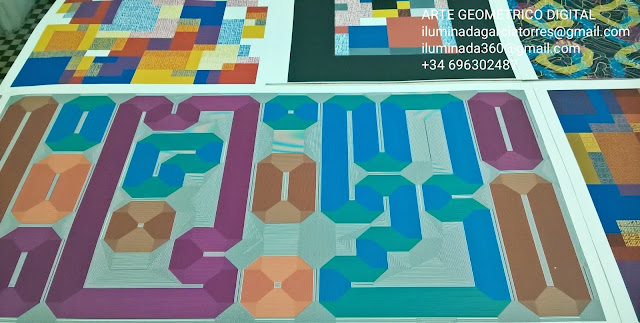 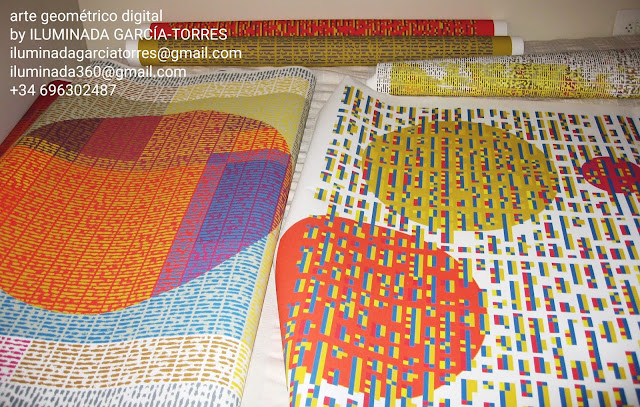 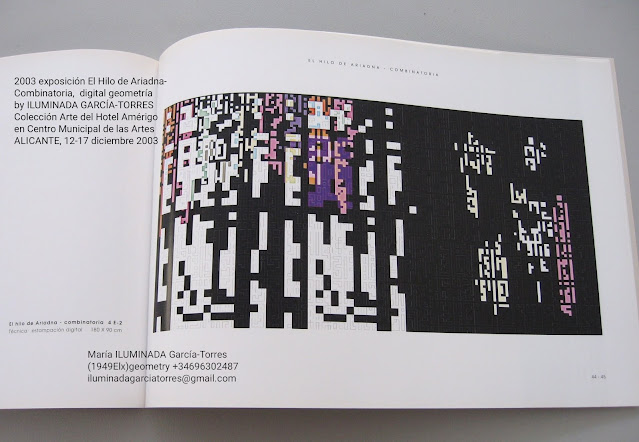 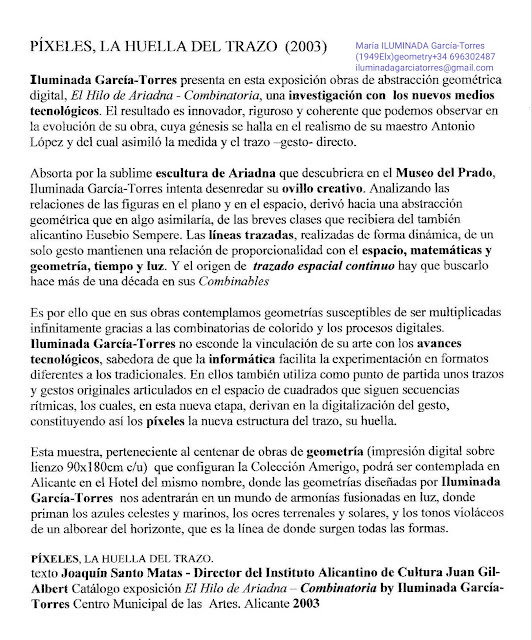 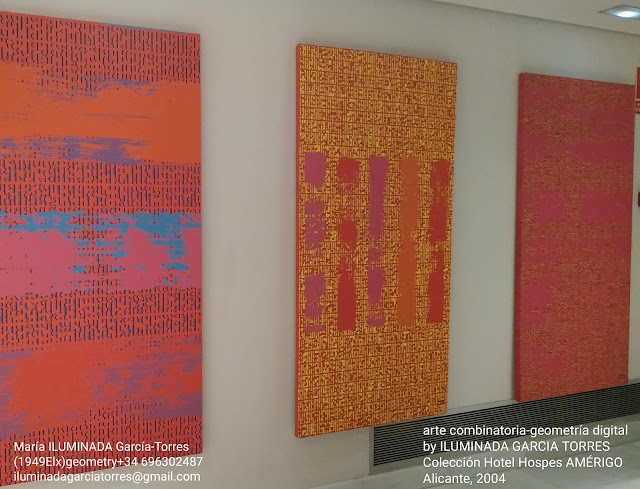 https://IluminadaGarciaTorres ​​2015
iluminadagarciatorres.blogspot.com
Texts written by art critics of exhibitions made by ILUMINADA GARCIA TORRES (ELX 1949) of Geometric Art: Pictorial, Sculpture and DIGITAL that she started in 1991 with the Geometries: COMBINABLES, TRAZADO ESPACIAL CONTINUO and THE THREAD OF ARIADNE, formulating continuous mathematics and geometry for her work. Previously, she worked 25 years (1965-1990) in painting, design of architectural compositions of geometry and in the two paintings, oil/canvas (1986-88) that ILUMINADA GARCIA TORRES made in the MUSEUM NAcional del PRADO (Madrid) of ARIADNE DORMIDA en NAXOS, marble sculpture. (exhibition paintings at the Galería Albatros, Madrid 1990).
http://criticosartemadrid.es/index.php/noticias/464-iluminada-garcia-torres-geometria-color-y-musicalidad-diagramas-digital-y-pintura-1991-2015
https://Retrospectiva/by-IluminadaGarciaTorres2009
https://GeometryDigital/​IluminadaGarciaTorres2015
spatial-drawings.blogspot.com

LA MIRADA ACTUAL
Tuesday, June 2, 2015
02/06/15.- ILUMINADA GARCIA TORRES (Elche 1949) she has made a Retrospective Exhibition with the title of Geometry, Color and Musicality, digital diagrams and painting 1991-2015, in the Municipal Exhibition Center of the city, Elche-Elx.
Julia Sáez-Angulo, vicepresident of the Madrid Association of Art Critics, AMCA, and member of the AECA / Spain International, writes in the catalog:
Geometry, Color and Musicality are three concepts of the eurythmy that emerges from the artistic work of ILUMINADA GARCIA-TORRES.
Geometry in which the rhythm of a musicality visible to the eyes is appreciated, inaudible, only in appearance.
She draws the dancing rhythm of a musicality that manifests herself in the wise administration of color on the support of paper, canvas ... geometry that dances; a musicality that is expressed in colors. Kandinsky already talked about it when he attributed musical notes to colors. Look at the sounds, hear the color.
Since the 90s she, ILUMINADA GARCIA-TORRES has a coherent research trajectory in Geometric Art, painting, sculpture and digital diagrams, from her works of Continuous Spatial Tracing,
Combinables to El Hilo de Ariadne. Geometry, color, rhythm and musicality are present in a creative world of lines, circles, squares, pixels ... designed by her artistic mind. Without leaving the painting, she uses the new technological means, which are fundamental in the generation of her innovative geometric artworks.
Geometry, Color and Musicality, is the conceptual key that describes the digital and pictorial geometrical work of ILUMINADA GARCIA-TORRES.
The lines drawn in the space reticular square, horizons that expand in cartographies of the musicality, express in the digital geometries of ILUMINADA GARCIA-TORRES a perception of she  at different countries, continents or cities: MUSICALITY-Sweden-Madrid-South America-Berlin -NewYork-MumbaiBombay-Beiying-Europe-GreeceGrecia-Tokyo-Paris-Nepal-Brooklyn-Africa-Universe.
ILUMINADA GARCIA TORRES, in 1965 she ingress and studied Professor of Drawing at the Superior Academy of Fine Arts of San Fernando, Madrid and Complutense University of Madrid. She lived in Madrid until 1997 and later in London, where she was a guest artist at Gasworks Studios of London, and since mid-1999 she resides in Alicante. In 2000 she returned to London to make an exhibition at Hortensia Gallery, Kensington and Chelsea College in London.
In 2003 ILUMINADA GARCIA-TORRES presented her geometry research, El hilo de Ariadna-Combinatoria, with the new technological media. Geometric art: one hundred works (200x100 cm.each) for the Art Collection of Hotel H. Amerigo, Alicante.
In her Continuous Spatial  Drawings, she, the painter ILUMINADA GARCIA-TORRES highlights each brushstroke in an affirmation of the energy, lines in brushstrokes of unique gesture, singular each  of the lines in the meditative trajectory  of rhythms in color gradations in the squares of her works in Geometric Art, and in the geometry compositions of she, with the new digital media, the PIXELS  constitute the structure of the lines.
Published  by Julia Saez Angulo y Dolores Gallardo en L.M.A.
https://GeometryDigital/​IluminadaGarciaTorres2015
http://lamiradaactual.blogspot.com.es/2015/06/iluminada-garcia-torres-geometria-color.html
music-numerical.blogspot.com Berlin
cartography-musicality.blogspot.com New York
lines-numerical.blogspot.com Sweden
musica-numerico.blogspot.com Madrid
numerical-musicality.blogspot.com Europa

50 YEARS OF TRAJECTORY PICTORIAL AND DIGITAL GEOMETRY
Text by Viviana Rodríguez Gimeno 2015
ILUMINADA GARCIA TORRES (1949 Elche) celebrates 50 years of her Pictorial work and Digital Geometric  Art. It is in 1986, when the appointments, she paints the marble sculpture of Ariadna in the Prado Museum and finds a new pictorial concept in her work. If the teachers of quantum physics, theory of everything, make hypotheses of the universe. The painter ILUMINADA GARCIA-TORRES discovered in the mythology of the Thread of Ariadna the point to develop in the Geometric Art and to find a full significance to her work.
The concepts that give name to the exhibition Geometry, Color and Musicality  by ILUMINADA GARCIA-TORRES encompass the extensive work, the intense dedication and the innovative research and reflection of she in geometric art.
Each brushstroke of her has its mathematical reason and makes each line unique, of harmony in a lucid composition and combinatorial of color in turn incalculable, and Musicality, perhaps for the spectators of her geometry works, is creativethat feeling of musicality. A rhythm of vitality, eurythmy of shapes and color, which makes it possible to glimpse the whole geometric universe in equilibrium created by ILUMINADA GARCIA-TORRES in her paintings of Continuous Space Path and digital diagrams printed on canvas Ariadne's thread -Musicality in which she shows her perception of different cities, continents, countries ... - Sweden-Beijing-Africa- Madrid-Greece-New York -Mumbai Bombay-Europe-Tokyo- Paris-Brooklyn-Nepal-Berlin-Latin America-Universe- ...GEOMETRY, COLOR and MUSICALITY is a renewal in Geometric Art.
Text by Viviana Rodríguez Gimeno 2015
exhibition catalog Geometría, Color y Musicalidad
of ILUMINADA GARCIA-TORRES. Municipal Exhibition Center of ELCHE 15may-06september 2015
http://lamiradaactual.blogspot.mx/2015/02/iluminada-garcia-torres-geometria-color.html
https://lamiradaactual.blogspot.com.es/2018/03/iluminada-garcia-torres-50.html
https://GeometryDigital/​IluminadaGarciaTorres2015

LA MIRADA ACTUAL enero 4, 2014
Iluminada García Torres investigates in her Digital Geometry, Mumbai Bombay. text by Julia Sáez-Angulo
ILUMINADA GARCIA TORRES (ELCHE 1949) investigates in her Digital Geometry artworks that she denominate Mumbai Bombay, in wide view and reflection on Asia.
In fact all her work in geometric abstraction begins with the proposal that she formulated in the catalog of her exhibition Combinables in 1993, where is the origin and the mathematical reason that ILUMINADA GARCIA-TORRES has developed in the geometry digital works, Tokyo, Beijing and now Mumbai Bombay, in hers Asian contemplation. She declares that after the New York digital geometries, she became interested in Asia in concepts of musicality, color and though.
text by Julia Sáez-Angulo
International Association of Art Critics, AICA
http://lamiradaactual.blogspot.com.es/2014/01/iluminada-garcia-torres-investiga-geometria-digital.html
musicality-numerical-drawings.blogspot.com
musicality-numerical.blogspot.com
thethreadofariadne-musicality.blogspot.com 2014
https://music-geometryDigital/iluminada-garcia-torres2014 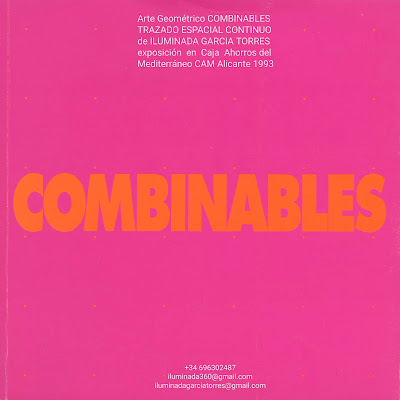